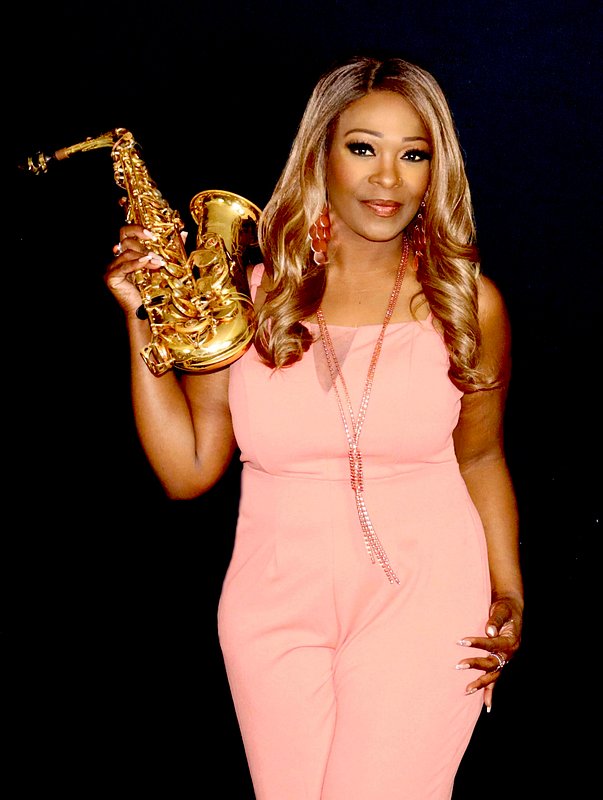 Jeanette Harris was born and raised in California’s post-Gold Rush town of Fresno in the center of the San Joaquin Valley. Reared by her mother, Annette, and her church organist father, Floyd Harris – both of deep spiritual faith and intense believers in the art of music - Jeanette and her older brother, Michael, received their love of God and family genetically.

“When I was 5, my father put a guitar in my hands,” Jeanette begins. “A year later, he switched me to piano with a private teacher. I didn’t like it. Reading treble and bass clefs was so overwhelming that I would cry, but it gave me a great jumpstart. One day while driving me to 4th grade, Mom was playing a cassette by Grover Washington, Jr. I remember looking at the picture of his alto sax. It was beautiful and Grover made it look so hip. I felt it would be the perfect instrument for me.”

Jeanette played saxophone and piano from grade school to high school where band teacher Steve Alcala also had her play in the Fresno City College jazz band even before she graduated high school. She won numerous awards and accolades, which led to a scholarship to attend Berklee in Boston where she earned a Bachelor of Arts degree in Music Performance.

Citing her influences, Jeanette continues, “(Saxophonist) Richard Elliot brought some serious R&B groove at a time when smooth jazz really needed more of that funk vibe, especially his song ‘Corner Pocket.’ I just loved his production! As a composer, Stevie Wonder’s music touches the hearts of people with lyrics that have strong meanings, and beautiful chords and melodies. And (guitarist) Norman Brown is the one that inspired me to want to be a performer when my parents took me to see him for my very first concert at The Bastille in Hanford, CA. He gave me chills!” After crossing paths with Brown on the road, Jeanette co-wrote a song with him that became the title track of her fourth CD, Saxified. Brown recorded the song on his Grammy nominated CD, 24/7, with a different title, “The Best is Yet to Come” featuring Gerald Albright. “To have Gerald playing a melody that I wrote is so amazing,” Jeanette shares.

Jeanette has played major events from The Coombs River Bend Ranch Festival to festivals in Japan and London.  She has performed as a side musician with Howard Hewett and Deniece Williams and has opened shows for greats ranging from smooth jazz stars Kirk Whalum, Najee and The Rippingtons to R&B stars Babyface, Phil Perry and KEM. “I got a standing ovation opening for KEM,” Jeanette beams. “He came out to meet me and get my CD. His people said he never does that! That let me know my music does crossover.”

The most special person to come along in the course of Ms. Harris’ career thus far was singer/songwriter Marie, who hired her unheard/unseen in a destiny-streaked leap of faith totally befitting Jeanette’s life and beliefs. “Her trumpet player saw me at the 2010 NAMM Show and asked for my business card. It had already been an unbelievable day where I got endorsements for both Unison saxophones and BARI Reeds. As I was driving home, the guy called me and asked if I wanted to play with Teena for a concert…in London! I couldn’t believe it. I got 4 hours sleep that night studying her music then drove to L.A. for the audition. I had to pull off the freeway when Teena called me personally to get my passport information. The band tested my improvising skills on a funk song and a ballad - then I was in! Teena finally arrived, gave me a big hug and away we went. She featured me in her last concerts playing sax on ‘I’m a Sucker for Your Love’ and ‘Portuguese Love,’ and flute on ‘Déjà vu.’ She was truly a blessing in my life. Teena taught me how to be a strong female leader. I will miss her always.”

Now with her fourth and finest CD Summer Rain bowing with her own signature Summer Rain perfume to match, Jeanette Harris is unquestionably the next “Starchild of the Saxophone” touching hearts with every breath she takes.